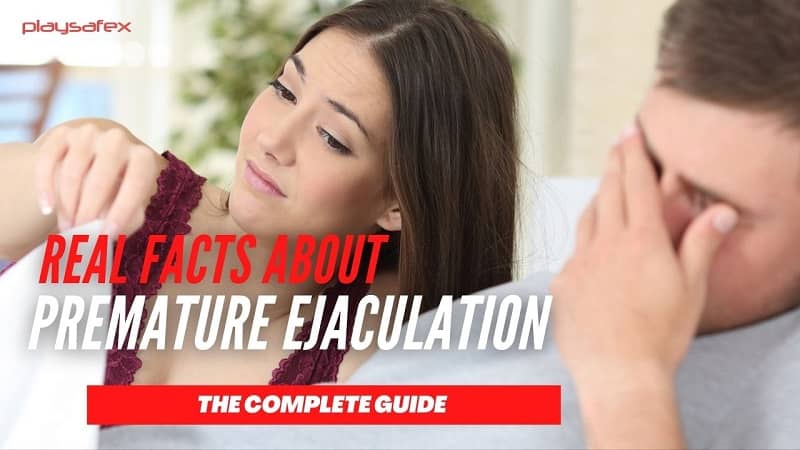 Premature ejaculation – a term which is quite common these days.

In fact, in the US it was found that everyone man, in a group of three men aging between 18 to 59, showed signs of premature ejaculation.

This might be because of lifestyle changes or because of biological factors.

But, should you take it as a serious issue or is it common with everyone?

Well, premature ejaculation can be a serious problem if not taken care of.

Thus, here we are with a detailed overview of premature ejaculation to help you find your way through this problem.

Thus, without wasting much time, let’s look deeper into the layers of premature ejaculation.

First, we start by highlighting some major facts that you must know about PE.

What is Premature Ejaculation?

To understand premature ejaculation in a better perspective, one must know how ejaculation works.

How does ejaculation work?

The central nervous system of your body controls your ejaculation. When you are sexually aroused, impulses travel all the way to your spinal cord and eventually the brain. When you attain a certain peak of sexual excitement these impulses are generated in your brain which is sent to your reproductive system.

These impulses cause the ejaculation of semen.

This phase includes the mixing of sperm with secretions of all your sexual accessory glands to form semen.

The semen stored in your base of the penis gets expelled out in this phase. This occurs when the muscles of your penis contract. Mostly, you get your climax or orgasm while you ejaculate.

However, some men can also achieve a climax without ejaculating.

Now, since you know how ejaculations work, it would be easy for you to understand whether you are suffering from premature ejaculations.

Premature Ejaculation – What is it all about?

Most of the men facing issues with erections experience PE.

In premature ejaculation, a man ejaculates sooner during his sexual intercourse as compared to his partner.

It is a common complaint of many men. But it is important to differentiate between when premature ejaculation is normal and when it should be taken seriously.

When you face premature ejaculation infrequently, it won’t be a problem for you.

However, if this starts happening regularly, it might be something serious.

But before we dig into when you should start taking things seriously, let us understand how common this problem can be.

How common is premature ejaculation in people?

It is one of the most common problems faced by people all across the globe. According to several studies conducted on men from different age groups, around 4 to 39% of men face this issue at some point in their life.

If we look at the findings of a leading health clinic, studies done on reviews of research work suggest that one out of every three men has premature ejaculation.

Thus, you don’t actually have to panic if you are facing this issue for some time!

It is a normal condition which men of all age groups face. Hence, you don’t actually need to be embarrassed about it!

In the case of women, they actually don’t care much about your premature ejaculation.

Data reveal that its men who ponder over their premature ejaculation more than their partners. These data also point towards women being completely normal with the fact.

Having said that, let us now focus on the symptoms that you might witness if suffering from premature ejaculation.

What are the symptoms of premature ejaculation?

Talking about symptoms, the major symptom that you would spot is the inability to sustain your ejaculation for more than one minute after penetration.

However, you might confuse yourself when sometimes you ejaculate normally and at other times you undergo premature ejaculation.

This case is actually the natural variable of premature ejaculation.

PE is of two types, one which is acquired and the other one being lifelong.

Lifelong – Lifelong Premature Ejaculation is when you have ejaculated this way since your first sexual intercourse.

Acquired – This is the most common form. Acquired Premature Ejaculation is when you witness sudden premature ejaculation after a long span of intense ejaculations.

Now the question is what can be the causes of this sexual problem? The following section will not only answer this question but will also give you some risk factors of PE.

What are the causes and risk factors of Premature Ejaculation?

The major causes of premature ejaculation are physical and emotional factors. However, there are many additional factors which can cause PE.

Some of these factors can have temporary effects, like, a man might face premature ejaculation during his initial sexual intercourses. But in his later life, he might just master his ejaculation!

However, as men grow old they tend to witness more severe premature ejaculation because they face difficulties in sustaining erections.

Having said that, let us look at some of the mental health factors that can cause PE.

Mental health concerns that can cause PE:

In the case of perpetrator or cases where you have the guilt of indulging into sexual intercourse, you might fear sex and face premature ejaculation

Other reasons that cause premature ejaculation:

These were some of the mental problems that cause premature ejaculation.

There are many physical conditions too which play wild cards in causing PE.

People with erectile dysfunction should be careful as they are the easy target of problems of PE.

Other than these, problems of hormonal imbalance, like low levels of testosterone, or lack of enough neurotransmitters may have a hand in PE.

Physical injuries like an injury to the prostate gland and inflammation of glands or urethra can also be the reason behind premature ejaculation.

Frequent cases of premature ejaculation might need medical seek. But for that, you must be aware of which is the condition where you might need a doctor

Let us help you with that.

When do you need to consult a doctor for PE?

It’s common for men to feel embarrassed about talking about their sexual problems but keeping secrets from your doctor is not a good idea.

Premature ejaculation is nothing to be ashamed of. It’s quite a common problem that is treatable.

For some men, consulting a doctor would be much relaxing as it would help you fight your fear of PE.

You must talk to your doctor when your PE:

A urologist is a person who specializes in the reproductive and urinary system.

Since consulting a doctor for the first time can be new to you here is a complete guide on what you can ask your doctor and what you must need to know before visiting him.

Get ready for your appointment

You can write down the following information before visiting a clinic:

Next, you can ask the following questions when you visit your doctor.

Questions you can ask your doctor:

Having said that, we move ahead with our next section. We now bring our focus to the treatments that you can look to!

How can you treat your premature ejaculation?

If you focus your thoughts somewhere else rather than focusing on ejaculation, your PE might not pose great difficulties.

However, this tip might not be useful as it has rare cases of success.

This method needs you to have complete mindfulness about your sensations before ejaculation.

You need to slow down your pelvic thrusting and change the angle and depth of your thrusting as soon as you feel the “no-return line” crossing.

Thus, this would help you ejaculate a little late

I slowing your tempo doesn’t help much in controlling premature ejaculation, you might need to stop thrusting for some time, while you maintain your penetration.

Once, your urgency to ejaculate subsides, you can resume thrusting.

This would help you understand your sensation better just before your orgasm. This way you would learn how to control your ejaculation

However, this method takes time to show results.

Pelvic muscle exercises are one of the most effective ways to delay ejaculation.

But for this, you need to find your pelvic muscles. For this, you can stop urinating in the mid or use muscles to prevent yourself from passing gas.

Once you know where these muscles are, you can go ahead with the exercises which are known as Kegel Maneuvers.

You can carry out these exercises while standing, sitting, or lying down.

When carrying out these exercises, make sure you don’t use any other muscles other than your pelvic muscles.

Decreasing your penis’ sensitivity during penetration might help you.

You can do so by wearing a condom.

In fact, the market has condoms which claim to be specifically designed for climax control

Sometimes erectile dysfunction can be a part of the PE causing factors. In such cases, your doctor might suggest some medications like Viagra.

They use selective serotonin which delays ejaculations. You can start with a low dosage and then increase it as much as you wish to

Once you start taking an effective dosage, these medications can be used hours before sexual intercourse.

Many mental health issues can be a factor behind PE. Thus, taking the help of a counselor can help you attaining mental peace and gaining delayed ejaculation.

Premature ejaculation is a common problem among men all across the globe. However, most of the men feel embarrassed about discussing these problems.

In the above sections, we have put forward everything that a person must know about premature ejaculation. Starting from what it is to what should be done to overcome this the problem, the above sections deals with all the minute details of PE

Thus, for all those men who are looking for a complete guide on what should be done when suffering from premature ejaculation must have a look at our above blog.

PLAYSAFEX.COM IS AN AFFILIATE WEBSITE AND LIVE TO PROMOTE HEALTH PRODUCTS. WE AT PLAYSAFEX ARE  INTENT TO EARN COMMISSION BY PROMOTING AFFILIATE LINKS NOT TO DIAGNOSE, TREAT, CURE, OR PREVENT ANY HEALTH ISSUE.

Scroll back to top